You are here: Home / nutrition / Oil That Burns Belly Fat and Increases Metabolism?

Even though the media constantly bashes coconut oil because it’s loaded with
saturated” fat, it’s actually one of the healthiest and most stable cooking oils you can
use and consume.

So although many health organizations advise against the consumption of high amounts of coconut oil it’s just another nutrition myth. 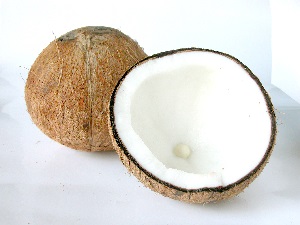 Coconut oil is composed of approximately 66% medium-chain triglycerides, which are known as the “fastest” fat-burning fats.

This means when you consume coconut oil, it’s rapidly digested and absorbed, which means it’s utilized very quickly for energy and won’t be stored as body-fat.

In fact, coconut oil is highly insulintrophic, so using coconut milk or a spoonful of coconut oil in your post-workout shake will not slow absorption or digestion of other nutrients, like
other fat sources will.

Coconut oil is also comprised of mostly lauric acid, an immune system booster that helps you ward off infections.

Because of its stability, it can handle high heats for cooking and it is slow to oxidize. This also means it’s very resistant to rancidity, so shelf life can last up to two years.

Here’s where it gets interesting about oil…

Despite the scare in the media, coconut oil is now been proven, through multiple studies, to increase metabolism and thyroid activity.

And much of the newest research also shows evidence of its fat loss boosting effects because the MCTs promote and help facilitate fatty acid oxidation (aka – burning of fat).

Additionally, coconut oil has been shown to naturally boost testosterone production because it improves the enzyme activity involved in testosterone synthesis.

Whether you’re a man or a woman, testosterone plays a critical role in the muscle building and fat-burning process.

And since testosterone levels begin to decline in the mid twenties, this is a very beneficial oil for men and women of all ages.

“What if I don’t like the taste of coconut oil?”

A lot of people want to use coconut oil, but don’t like or want the coconut taste in their diet or recipes.

You can now buy “expeller-pressed” coconut oil, which shows most of the benefits, but has virtually no taste.

So another great way to start burning more fat and controlling your insulin levels is by including this oil in your plan consistently.

I love it in my coffee and it adds a hint of “sweet” flavor and creamy texture to my super-shakes.

This is especially effective when following an easy and simplistic rapid fat-loss plan like
The ONE Day Diet.

If you haven’t downloaded this SUPER simple nutrition plan yet, you can grab it right here:

Have an awesome Thursday.