You are here: Home / nutrition / Glycemic Index | What a Hoax!

It’s pretty common knowledge in the health and fitness industry that you should always try to use fibrous starchy carbs instead of white ones if your goal is to lose belly fat.

Well believe it or not this is really a load of B.S. – especially if you’re an exerciser.

Don’t get me wrong.

I still think foods like sweet potatoes and other fibrous rice types are great carb choices for certain individuals.

But choosing a starch because it has a lower glycemic index, or because it’s higher in fiber may not always be the best choice.

Let me quickly break down a few misguided reasons most people choose to avoid white starches and pick fibrous ones instead:

Typically, anything over a 70 on the glycemic index is considered high. 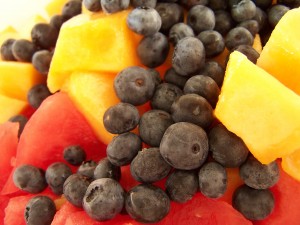 Glycemic Index of blueberries is 53

Since it’s nearly impossible to burn fat in the presence of high insulin,
it would only make sense to choose lower glycemic carbs every chance you get.

However, this number basically becomes irrelevant when you combine any
starchy carb with proteins like you’re supposed to.

It then becomes about the glycemic load, which is also determined by portion control.

So the impact any food will have on insulin is also determined by the actual portion size or amount you eat.

And since you should never eat a starchy carb by itself anyway, the glycemic
index shouldn’t be a concern, particularly for intense exercisers.

Also, many times the pure amylopectin starch found in the white stuff is
less problematic than a starch containing gluten or lectins that you get from
whole grain and whole wheat foods.

So if you’re trying to choose foods based on the glycemic index to burn more fat and stay healthy, think twice.

I’m not saying you can go around snacking or binging on high glycemic, processed carbs without fat-storage.

But don’t be obsessed with avoiding white starches and other high glycemic index carbs.

You just have to be “smart” about your approach.

Focus on food timing, portion control and combinations instead and not the glycemic index!

Always try to consume your higher carb meals WITH lean protein in your post workout window and don’t binge or stuff.

In the meantime, if you’re a woman who needs to lose at least 10 pounds then you’re going to want to pay close attention to the information my buddy John Barban shares with you at the link below.

And if you’re a man looking to reprogram your metabolism and
literally “reinvent” the way you look, you absolutely MUST see
the before and after pictures inside this video:

MEN: This is the perfect male body according to Men’s Health <— Show me!