You are here: Home / nutrition / 4 Ingredients Found In Your Grocery Store That Can Accelerate Your Fat Loss Naturally

Hi everybody! My husband and I just got back from a one-week anniversary vacation up in Northern Michigan.

(You can see the pics below; the cute sign he drew me in the sand, the view from our cabin deck, one of our sunset cruise pictures (after a few drinks), and my crazy hubby doing a back flip off our boat.) 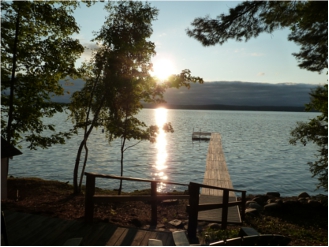 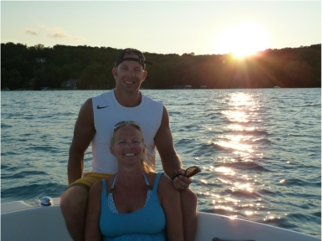 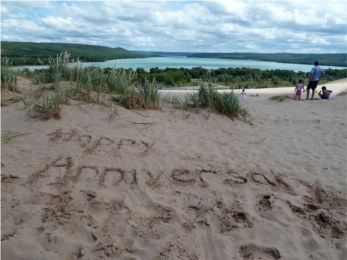 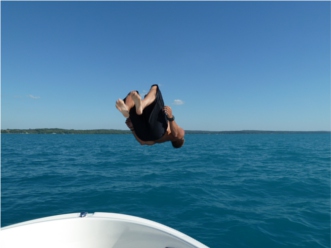 As always, there was a LOT of partying and consumption of unhealthy foods like deep-fried pickles. Ingredients: dill pickles wrapped with ham and Swiss cheese then deep-fried in a wonton.

Can you say Yummylicious! Nutrition Content = you don’t want to know! 🙂

To top it all off, I already kind of feel like a “fatso” because I’ve slacked a little more than I should have this summer.

This always seems to happen to me every summer.

You probably might be able to relate. After all, we only get 3 or 4 months of good weather up here in Michigan. We all gotta enjoy life a little bit.

Even though we realize that taking a break from the hustle and bustle of everyday life is absolutely necessary two or three times a year, the most depressing part is coming home.

It seems like we’re always depressed for 2 or 3 days when we have to come back to the reality of everyday life.

That’s why we always take a picture (I call it a fat picture haha) and plan out at least eight weeks of nutrition and exercise.

But sometimes that’s not enough. Even if you have your nutrition and exercise planned out, sometimes we need something to give us that extra edge.

And let’s face it. If you’re using something that can give you that “extra edge”, you’re more likely to eat right and not miss your exercise sessions.

Believe or not, some natural ingredients found right in your grocery store can actually keep your metabolism “exercising” at rest making it easier to burn fat.

Four of the most studied of these ingredients are coffee, hot red pepper, cinnamon and green tea.

It’s kind of funny because I’ve used every one of these ingredients in my everyday cooking for years without even realizing they can actually have a synergistic effect.

Shaun introduced me to an article about these four ingredients that I read while we were on vacation. It was written by Jayson Hunter (head of R&D with our friends at Prograde Nutrition) and I found very intriguing.

I thought you would also find interesting.

Below are the actual results from studies cited on these ingredients from Jayson about the natural benefits.

Here’s just a small sample of what human studies (actual humans – not animals) have reported about these four all-natural fat fighting ingredients:

1.   Coffee (caffeine)
While the proportions may shift from moment to moment, your body always burns a mixture of three fuels: carbohydrate, fat and protein.

Thus, if you increase your overall calorie-burning rate (a.k.a. metabolic rate), it’s pretty much guaranteed that your fat-burning rate will go up, bringing you that much closer to the negative fat balance territory where real slimming occurs. 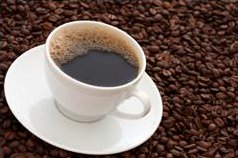 About 75% of the caffeine consumed in the United States comes from coffee, a product that no supermarket can be considered complete without. Caffeine is recognized worldwide for its ability to enhance alertness and performance. However, it also displays fast-acting calorie-burning properties. For instance, a study involving lean and overweight (obese) subjects reported that a single 100-mg dose of caffeine (equivalent to a little over 1 cup of coffee) was enough to raise their calorie-burning rate by up to 4% for 2.5 hours.

While a 4% increase may not seem like a big deal, it can turn into one. The scientists who conducted the study explain, “…if it is assumed that there is no compensatory increase in food intake, the increase [in calorie-burning rate] after caffeine would represent an energy deficit of 75-110 kcal/day. These changes may be small but over several months could accumulate and lead to substantial changes in body weight.”

But wait. Regular coffee drinkers know all too well that you can become tolerant to its energizing effects over time. Won’t the same thing happen here? Fortunately, evidence suggests that caffeine’s calorie-burning effects persist with repeated exposure. Case in point: The subjects in the above study were all mild to moderate consumers of caffeine, consuming anywhere from 250-500 mg per day, equivalent to ~3-6 cups of coffee. Yet they all enjoyed a calorie-burning boost from the relatively small dose given to them.

The waiter places a delicious meal in front of you that includes a spicy curry sauce. You devour it. For the next 30 minutes your calorie-burning rate is cruises at 10% above baseline, equivalent to burning an additional 129 Calories per day, or 27% of the caloric value of the entire meal.

Sounds too good to be true?

This fictitious scenario became a reality at Kyoto University in Japan when scientists gave young women a 481-Calorie meal consisting of a yellow curry sauce containing 3 mg of capsaicin.

Capsaicin is the compound responsible for the sharp, and for some of us, intolerably painful, sensation produced by eating hot red peppers. It’s also to blame for the beads of sweat that appear on your forehead as you do so. Thus, it may come as no surprise to learn that deep inside the body capsaicin can increase your calorie-burning rate by stimulating a process known as thermogenesis.

Thermogenesis essentially involves the release of calories in the form of heat. Once released, they can no longer be stored as body fat. In addition to increasing thermogenesis, capsaicin has been found to improve meal satiety (i.e. how full you feel after eating), thereby reducing your risk of overeating. In animal studies it has been reported to increase calorie-burning rate and reduce body fat.

Of course, the single most powerful way to increase your calorie-burning rate and get into negative fat balance is to exercise. Here, too, capsaicin may boost your slimming efforts. When scientists gave healthy subjects capsaicin an hour before performing low-intensity exercise (stationary cycling), they burned more fat. The increase was impressive enough that the scientists suggested capsaicin be used as an adjunctive therapy in the treatment of elevated blood lipid levels and/or obesity.

Cinnamon often serves as a flavorful addition to carbohydrate-rich meals. How great is it, then, to learn that it may help “push” more of those carbohydrates into lean muscle and away from fat cells (adipose tissue)?

Most of the carbohydrate calories you eat are eventually converted into glucose (a.k.a. blood sugar). The hormone insulin helps direct glucose into your body’s cells, including muscle cells. The more sensitive your muscle cells are to insulin, the more efficiently they can scoop up glucose and store it for later use, such as providing your muscles with energy during exercise. All other things held constant, this leaves less glucose available for your fat cells, which might otherwise use it to make body fat.

So cinnamon increases insulin sensitivity and improves blood glucose regulation. Great. However, does this mean it can help you lose body fat more quickly? In fact, this ancient spice might help you do more than that. Dr Richard Anderson (Ph.D.) at the US Department of Agriculture has conducted numerous studies on cinnamon.  He says that if cinnamon is consumed long-term, it can enhance lean body mass (this includes muscle) and reduce body fat, something he and his scientific colleagues demonstrated in a study performed in 2006.

White, green and black varieties of tea all contain caffeine (anywhere from ~14-61 mg per 6-8 oz serving). But it’s green tea that seems to get the most attention from scientists when it comes to burning fat. And its fat-burning effects are due to more than its caffeine content. 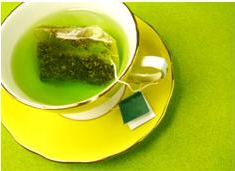 In one frequently cited study, healthy young men were given a green tea extract three times per day. Their 24-hour calorie-burning rate was 3.5% higher than that of subjects taking a placebo. This was equivalent to burning an additional 200 Calories per day -more than enough to eventually produce substantial weight loss and reductions in body fat.

Not only did green tea cause the subjects to burn more calories, but a larger proportion of the calories burned were determined by the scientists to have come from fat. That is, green tea was pushing them closer towards negative fat balance territory, if not pushing them right into it. Based on the scientists’ comments (they used the term “remarkable” to describe green tea’s effects), they seemed to be quite impressed. Indeed, green tea’s thermogenic effects in this study were as powerful as much larger doses of caffeine.

After reviewing these ingredients and the research behind them, you can see exactly why these 4 ingredients can give you that extra edge – naturally.

Although these studies seem like they have a lot of potential, there’s really a lot more to learn about how you make these proven ingredients work together in the right way.

And even though I love to cook, it would be nearly impossible to spend each day trying to incorporate these 4 ingredients consistently into a nutrition plan and actually know I’m getting these benefits.

Here’s a great way to make using everyone of these 4 ingredients a no-brainer.

You’ll discover exactly how you can get these 4 fat fighters working together all at the same time to dramatically increase their effectiveness.

Prograde has actually put together an easy and convenient way to actually combine all these ingredients and get immediate benefits in one convenient supplement.

Plus, let’s face it. The older we get, the harder it is to keep the weight off.

That’s why I occasionally use all-natural stuff like this to get back on track after a long summer and as extra incentive to eat clean and get to the gym consistently.

One more very important point I must make.

You could take the greatest supplement in the world and still not get any benefits IF you don’t have nutrition and exercise in-line and consistent first.

Supplements should always be used to do exactly what they say. “Supplement” your current exercise and nutrition plan.

But…and this is a big but, it’s important that you stick with the “all-natural” stuff and not the artificial, hyped up fat burning pills and gimmicks you see everywhere.

Otherwise, as Shaun always says, you could just be making expensive urine.

That’s why we always take the all-natural route.

We’ll definitely be using these ingredients after Labor Day as extra motivation to stay on track.

I hope you enjoyed this and it helps you put together your “post-summer” fat loss plan.

If you’re anything like me, it’s time to get your camera out!

Have a great day,
Karen

P.S. Just to be clear, I have to say it one last time. These ingredients are not a cure-all, but science sure has come a long ways to help us use them to stay healthy and burn more fat.