You are here: Home / nutrition / Dangers of Soy | Soy is Not “Healthy” Here in America

Did you know there is a huge difference between the soy in America and the soy the Japanese eat?

That’s because Asian soy is “fermented.”

This is an extensive process that removes the soy toxins. 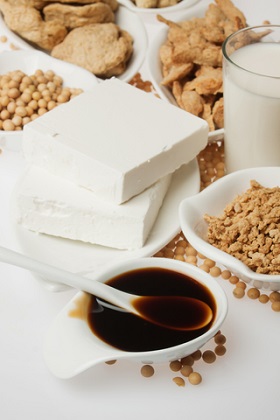 Dangers of Soy here in America!

Fermentation completely transforms soy and gets rid of of most of the anti-nutrients, allergens and hormone-disrupting compounds found in raw soy beans.

It also replaces these harmful substances with good bacteria, large amounts of vitamin K and other cancer-fighting nutrients that boost your general health.

Additionally, soy in the Japanese culture is mainly used as a condiment– not added as a cheap filler in their food supply like is here in the states.

In fact, the second Asians adopt soy from Western diets, they develop the same health problems as we do.

Over 60% of the food on our grocery store shelves have some form of soy, so you have to know what to look for because it’s hidden in other ingredients.

Small amounts of soy are okay, but if your goal is to stay healthy burn more fat, then I recommend you eliminate most forms soy from your diet.

This also includes soybean oil, which is in almost all processed commercial salad dressings and a ton of other big-industry foods.

It’s amazing what marketing has done to make people all over the world believe that soy diets and unfermented soy foods like soy milk and soy protein are somehow “health foods.”

I’m not claiming to be an expert on soy, but certain individuals, like my great friend Nicky P (the Nutrition Nerd), claim it can have a number of negative side effects, including excess fat storage

Dangers of Soy And Your Hormones…

Although this is not conclusive, a good amount of studies show that soy may reduce testosterone production and increase prostate cancer risks.

Other studies show no negative side effects, so until more research is done, you’ll have to make up your own mind.

I’ll be back next week to uncover 5 big fat-storing problems you probably never knew about soy.

Of course his is just one of HUNDREDS of food lies that we’re all being force fed when we try to make healthy food choices.

For example, did you know the olive oil in your kitchen RIGHT NOW, might be fake?

In fact, recently, Consumer Reports revealed that approximately 20% of ALL olive oils are FAKE and have been mixed with other cheap oils, while still claiming to be 100% pure.

Even worse 73% of olive oils labeled as “extra virgin” (the best and most nutritious kind of olive oil) did NOT PASS purity testing and were instead heavily processed.

This means that your olive oil could be LOADED with dangerous trans fats that are destroying your health and wreaking havoc on your waistline.

If you want to make sure YOUR olive oil is pure and that you aren’t falling for this huge olive oil SCAM, my good friend Nick Pineault shows you how to ensure your olive oil’s purity on the next page:

Dangers of Soy and other Foods