You are here: Home / nutrition / Are Tanning Beds Safe? 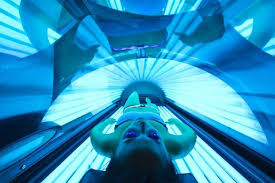 Karen and I get plenty of sunshine when we flee the brutal winters of Michigan and head south like thousands of other snowbirds.

Since we have access to the sunshine almost every day we spend there, the thought of lying on a tanning bed is obviously not very appealing but there are some serious ramifications that should be considered when making the decision to use a tanning bed.

Here are both sides. I am also providing you with plenty of references so you can research this on your own and decide for yourself.

35% of American adults, 59 % of college students, and 17 percent of teens have reported using a tanning bed in their lifetime.1

Nearly 70 % of tanning salon patrons are Caucasian girls and young women, and melanoma is increasing faster in women 15-29 years old than in young men of the same age.5-6

The indoor tanning industry’s revenue was estimated to be $2.6 billion in 2010.7

The amount of the radiation (both UVA and UVB radiation) produced during indoor tanning is similar to that of the sun. 8,9

The Food and Drug Administration says that about 30 million Americans use indoor tanning beds each year, including 2.3 million teens.

More than 35% of American adults report ever using a tanning bed, along with 59% of college students and 17% of teens in the analysis.

People who use a tanning salon before age 35 increase their risk of melanoma by 75%, according to the Centers for Disease Control and Prevention.

Many states restrict tanning for minors (people under 18) or require parental permission. (6 states have banned it)

Evidence from multiple studies has shown that exposure to UV radiation from indoor tanning devices is associated with an increased risk of melanoma and non-melanoma skin cancer, including squamous cell carcinoma and basal cell carcinoma.10,11

Higher melanoma rates among young females compared to young males may be due in part to widespread use of indoor tanning among females.

BUT … not all tanning beds are created equal …

Here’s the other side of the coin: :

On Dr. Mercola’s Website (www.mercola.com) he states the following:

UV devices are commonly referred to as “tanning” beds. The FTC is clearly not separating the significant difference between a high-pressure UVA light device purposely made to darken skin versus the use of UV lamps designed for nutritional purposes.  I am part of the scientific community convinced by extensive evidence that limited and controlled UV exposure, ideally from the sun but also if need-be from the limited and controlled use of a sun bed, is crucial to a healthy life.

It makes even less sense when you consider that even sun avoiders develop melanoma — the deadliest form of skin cancer.

A number of authorities, including the National Institutes of Health (NIH), have shown UV light helps promote vitamin D production and deliver other health benefits, including improved cardiovascular health and a reduced risk of 16 different types of cancer, including breast cancer.

Research14 has also shown that UVB therapy, specifically, does not raise your risk for skin cancer.”

So there you have it. Research for yourself the pros and cons.

The following should be some general guidelines:

Seven years ago I lost my cousin (and a very close friend) to melanoma when she was only 38 years old… and guess what?… she NEVER used a tanning bed.

I personally avoid tanning beds altogether in favor of REAL sun, but when I’m at home during the winter months I simply do NOT get enough Vitamin D (like most of the population who lives in colder climates) so I keep a sunlamp next to my desk and turn it on a few times per day.

If you like the look of having a tan, I personally think it’s a much smarter just to get a toxin free spray tan.

Always make sure to use common sense and make an educated decision on what’s best for YOU.

10 The International Agency for Research on Cancer Working Group on artificial ultraviolet (UV) light and skin cancer “The association of use of sunbeds with cutaneous malignant melanoma and other skin cancers: A systematic review.” International Journal of Cancer. 2007 March 1;120:111-1122.