You are here: Home / motivation / Glycemic Index | The REAL Truth

It’s pretty common knowledge in the health and fitness industry that you should always try to use fibrous starchy carbs instead of white ones.

Well believe it or not this really a load of B.S. if you’re an exerciser.

Don’t get me wrong.

I still think things like sweet potatoes and other fibrous rice types are great carb choices.

Let me quickly break down a few misguided reasons most people choose to avoid white starches and pick fibrous ones instead:

Reason #1: Because they have a low glycemic index

The glycemic index attaches a number to food, which indicates how much it will raise blood sugar and/or spike insulin.

And since it’s nearly impossible to burn fat in the presence of high insulin, it would only make sense to choose lower glycemic carbs every chance you get. 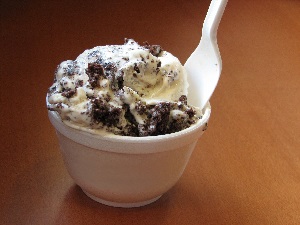 If you said carrots, you would be incorrect.

And since you should never eat a starchy carb by itself anyway, the glycemic index shouldn’t be a concern for intense exercisers. It’s a myth.

Reason #2: Because they contain more protein

Proteins from starchy carbs almost always contain gluten, which can actually block the absorption of protein and cause autoimmune diseases in many folks.

In fact, gluten is another reason I recommend people cut out almost all processed foods at least 5 days of the week. Remember, it only takes a teeny, tiny amount of ANY type of gluten to have a toxic and inflammatory effect on the body.

Even so-called healthy grains that have protein in them contain “anti-nutrients” that can be very problematic for many folks.

Additionally, you should easily be able to get all the protein you need from naturally fed animal proteins and limited amounts of dairy instead.

My advice is to stop choosing ANY impact carb because it has more protein.

That’s not what carbs are for.

If you exercise intensely, you should be eating starches to:

ALL of this will lead to more fat-loss and a healthier metabolism as long as you’re exercising consistently.

Hopefully this gives you some insights on why lower glycemic carbs really shouldn’t be a concern when you combine your meals properly.

In the meantime, check out this fat-burning “drink” that Karen and I use every day:

It’s the “perfect” superfood cocktail made from 75 whole food sourced ingredients in their natural form and it’s formulated by doctors and nutritionists: