Hey everyone. So here I am live at the beach here in Grand Haven, Michigan. This is like a hidden gem or what we call the California of Michigan.

Today we’re going to talk about something that is a little controversial. Now I was skeptical at first about this method called ab-targeted cardio.

Basically what this is about is blood flow and how blood flow relates to fat loss.

I’ve been doing a lot of research over the last few years about this from a guy named Lyle McDonald. I like to give credit where credit is due.

Lyle is the man; he breaks down the science. I can then simplify it and break it down to hopefully make it easy for you to apply it.

So here’s how it works.

You’re basically going to go into this circuit following periods of short, intense exercise like High-Intensity Interval Training (HIIT).[pro_ad_display_adzone id=”8825″]This is because directly after your sprints or short (between 10 to 30 seconds) and hard bursts of exercise, you’ll force the release of all sorts of fat-burning hormones and prime your body to release blood flow to the stomach.

So following a round of 5 to 10 of these bursts of high-intensity exercises, I want you to go straight into the following ab circuit. 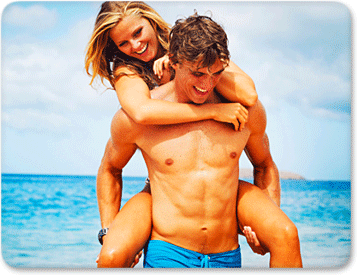 Taking on the Ab-Targeted Circuit

Perform somewhere between ten to twenty reps of each ab exercise, with about thirty seconds of rest between each set.

After finishing the first circuit of three to four exercises, rest for about a minute or two.

I then want you to repeat the circuit two more times, for a total of three circuits.

Once you’ve completed this ab-targeted circuit workout, you’ll have massive blood flow in your stomach area.

I want you to immediately go back over to the cardio area or an exercise of your choice and do steady-state cardio for twenty minutes or longer.

Studies show that because there’s significant blood flow in your stomach area at this point, now when you’re burning off these free fatty acids with steady-state cardio, you’re more likely to target that stubborn belly fat.

Now, I’ll be the first to tell you that if you’re at somewhere around 15% or more body fat for a female or 10% or more for a male, you’re probably not going to see the results or pronounced definition from this ab circuit.

However, why not stack the deck in your favor?

Even if you have 20, 30, or even 40 pounds to lose, if you stimulate blood flow in your stomach and then go straight into steady-state cardio, your body is much more likely to target the fat in your stomach vs. other areas.

A Couple Warnings to Keep in Mind

I do have a couple warnings about this:

First, as I mentioned earlier, you’re not going to see the pronounced definition in your abs with this if you aren’t already lean.

The second warning I have is that you could fall victim to what I call time under tension.

I caution you on this for cardio, because what this will do is if you add too much resistance for an extended period of time, you’ll end up bulking up with muscle more than burning off fat.

So, for your cardio following the ab-targeted circuit, dial back the resistance and focus more on speed or RPMs.

This way your body will focus its full attention on blasting that stubborn belly fat.