You are here: Home / exercise / How to Look Like a Super Hero (and AVOID Plateaus)

Lessons in Leanness from John Romaniello…

Yesterday, I was talking to one of my online clients, and our discussion turned into a very in-depth conversation that I thought was really profound, and could be useful to a lot of you.

Chris happens to be getting really incredible results—down 12 pounds of fat and up 4 pounds of muscle in 7 weeks total—and not only are these the best results he’s ever gotten…this 7-week period is pretty much the ONLY time he’s seen consistent progress.

Even though he’s been training for years, if you were to graph out Chris’ results over the course of that time, it would mostly be a flat line, interspersed with a series of “blips” that were few and far between.

However, during the time he and I have been working together, he’s made progress, week after week.

Why the change? Is it because I have some magic up my sleeve?

No—contrary to popular believe, I did not attend Hogwarts, I do not ride a broom, and I cannot do magic of any kind.

However, I DO get results that are well beyond the ordinary, and that does require a certain level of near-magical knowledge, because it involves a simple “trick.”

That trick, simply, is to avoid the mistakes that most people make.

If you can manage to avoid some of the more common mistakes, I guarantee you’ll see your progress skyrocket.

Even when they DO finish a program, these hoppers don’t really think about the overall structure of their training as a whole, and move to whichever program seems cool at the moment.

As you can probably guess from the tone of my assessment, I don’t think highly of this; in fact I consider it to be the number one mistake that is holding people back in their training.

Now, let me just say that I completely understand the desire here: you want muscle, so you do a muscle building program; then you want fat loss, so you do a fat loss program. From a logical perspective, that does make a great deal of sense and things SHOULD go well.

Here’s the problem: when you jump from program to program, these training methods often vary from each to a very significant degree.

Of course, on occasion, that works out well, and the “change” in stimulus can lead to increased metabolic disturbance and force an adaptation—which means can lose fat, gain muscle, or both.

Unfortunately for us all, most of the time, though, that’s not the case.

You see, your body is a tricky organism, and while variety definitely has its place, it’s only TRULY effective if you structure that variety in a way that allows these programs to build off of each other.  The truth is that in most cases, it’s the opposite that occurs.

For example, if you perform a muscle-building program that utilizes very low reps, you’ll increase strength in that rep range (and, assuming volume is high enough, you’ll gain mass).  However, your strength endurance will drop—meaning, your ability to train effectively with high reps decreases.

After that program, you jump onto a fat loss program, and most of those programs require you to train with high reps; however, your body is now deconditioned with regard to such training.  In order to do the program, you have to lighten your weights considerably.

So, yes, you’ll burn some fat, but you’ll also get weaker.

After that, maybe you want more muscle…but now the problem is that you’re weak(er), so you have to focus on strength as well as muscle.  Not the worst thing in the world, sure, but it slows your progress down substantially.

You can see where I’m going with this.  People seem to put a lot of thought (hopefully) into the program they choose—but all that consideration won’t mean much if you don’t put as much thought into the ORDER in which you perform those programs.
And that brings us to the important part of this article.

In the strength-training world, we refer to a concept known as “periodization.”

This is a term that refers to setting up your training into specific blocks of time (or periods), with each period focusing on a specific fitness quality.

The goal is to periodize in a way which allows the qualities you develop to build upon one another, creating a system where each period is more effective because of the ones that came before—this is known as  “progressive programming.”

If you set up your programming in the right way, you’re consistently making progress, because each week you’ll be utilizing qualities developed the week prior to that.

This, by the way, is exactly why my client Chris is getting such great results.

Contrast this with the example I gave above, where you’re consistently trying to play “catch-up” just to regain what you lost during a previous program or period.

Instead of a series of two-steps-forward-one-step-back cycles, you’re making consistent, forward and direct strides towards your goal.

Periodization and progression are worked into everything I design, and that’s especially true with my new program, SUPER HERO Fat-Loss, which will “officially” be made available to you and a few other friends of mine tomorrow (Wednesday, July 18th) for a special 3 day VIP discount.

You see, Super Here Fat Loss is a 12-week program that’s broken into 4 phases—each phase focuses on a different quality, as we discussed above.  Phase 1 focuses on strength, phase 2 on strength endurance and fat loss, phase 3 on muscle gain, and phase 4 on density and overall fitness.

To give you some insight into why that’s so effective within the context of the SUPER Fat Loss I want to walk you through how your body will react when you perform that program.

During Phase One, you’ll get considerably stronger; however, because of the structure of the workouts, you’re also very like gain some muscle and lose some fat.

During Phase Two, your focus is building muscle endurance and burning fat.

And, because of Phase One , you’re now a lot stronger and more explosive; this allows you to use heavier weights during your fat-burning workouts, which in turn means you’ll be burning more fat and increasing strength endurance—even at higher weights.

From there, you move on to Phase Three. This phase is dedicated to building muscle, which requires you to train with higher reps; however, you won’t need to lighten the load. Because of the strength increases in Phase One, and the endurance you built in Phase Two, you’ll now be able to lift heavier weight for MORE reps, which in turn allows you to build even more muscle.

Phase Four requires you to call on each one of these qualities one day per week each—so during that phase, you’ll continue to increase strength, burn even more fat, and build more muscle, SPECIFICALLY because your body has become more efficient (and proficient) at each one.

THAT’S the power of periodization and progressive programming—it creates a system wherein the whole is greater than the sum of its parts; the result is that each part of your training will benefit from everything else you’ve done prior.

And, as I alluded to earlier, this concept can be applied either to a single program, like the SUPER HERO Fat Loss, OR it can be applied to strategically moving from one program to the next.

Now you can probably see why understanding this concept is the KEY to bringing your training and your results to the next level.

Remember, it won’t matter how good a program is if your body isn’t primed to get the most out of it—you simply won’t get the results you deserve.

If you can avoid the mistake of running from program to program, and learn how to choose programs and schedule them in a way that builds off of each other, you will consistently make progress.

One way, of course, is by picking up the SUPER HERO Fat Loss System which goes on sale for 30% off of the normal price on Wednesday, July 18th.

And for any of my readers that grab it through my link (in tomorrow’s email), I’ll be hooking you up with a 7 Day Plateau Busting Carb Cycling Meal Plan – 100% FREE. 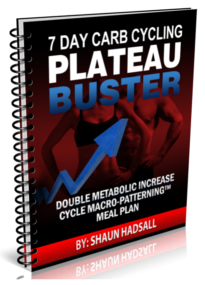 Make it a great day,